The best part about my writing life is sharing most of my journeys. In my new children’s book, Christmas in Sanoyea, readers get to experience a little of the celebrations on Christmas day in Liberia. This Christmas, Ian is looking forward to spending the holiday with his twin cousins, Nostelor and Nostelda, who have come to Liberia from America for their first Christmas. But they won’t be spending Christmas in Monrovia, where the city is bursting with all kinds of entertainment. On Grandpa’s farm, Christmas in Sanoyea would surely be unforgettable.

Christmas is the most celebrated holiday in Liberia. No matter what your family’s financial circumstances were, everyone got something new. Most children knew that it is their parents who gave them Christmas presents, not Santa Clause. Nevertheless, we looked forward to seeing Sanny Klos (Santa Clause) more than anything else. 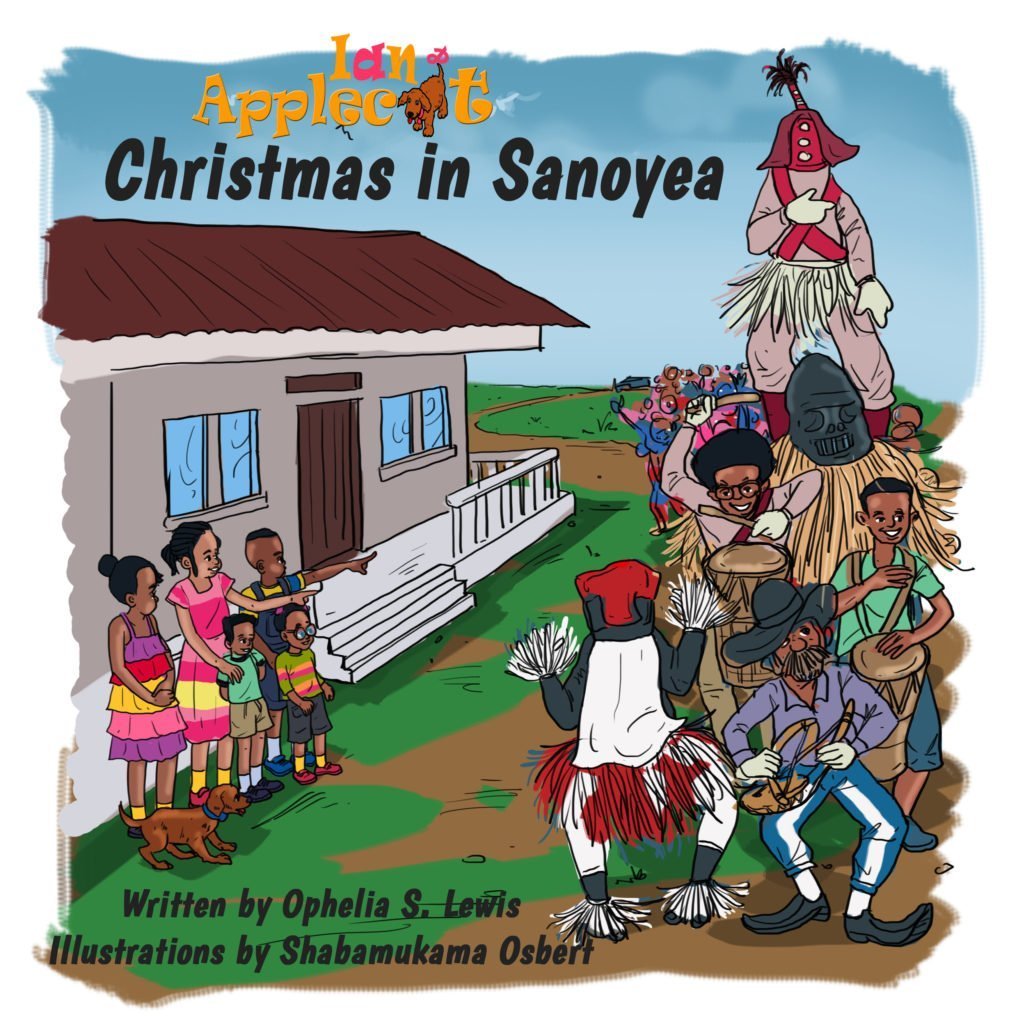 The Christmas season begins with the appearance of the first Sanny Klos . It might be a cool evening, early in December perhaps, when at first you barely hear the throbbing drums at a distance. Before long, to your delight, the small gathering of strangers eventually reaches your neighborhood—Sanny Klos appears with his entourage of musicians and a group of fans. He is skinny, custom-dressed with sequence trimmings down the side of his pants, as well as his long-sleeved shirt, gloves to cover his hands, and a pleasant-to-look-at false face (face mask). The musicians are geared with different musical instruments; two or three types of drums, a carpenter’s saw, few empty Club Beer bottles, an old wooden washboard and other objects suitable to make noise. These musicians pound the drums, strike the edge of the saw with rhythm and run the spoon up and down the washboard repeatedly to make authentic music. Sanny Klos dances and performs all sorts of acrobatic turns to the rhythm of their music. He positions his body, lying face down with his hands under his shoulders as if he is about to do push-up exercise, but trembles instead, so we are in awe of the dynamic actions of the tassels on the side of his pants and shirt-sleeves. He skips, shuffles, swings and prances with impressive dance routines.

For their magnificent performances, spectators pay nickels, dimes, quarters, and at times a dollar. I did not realize then that these were cultural artists earning a living.

I must confess, this entertainment gets addicting. Absent-mindedly, you are inclined to follow the group as they leave your neighborhood to perform at other neighborhoods. This show is so amusing that you are not aware of the distance you’ve traveled, following the entertainers from one neighborhood to another. Before you know it, you have gone several miles from home without your parents’ permission, risk getting some tough-love.

You were not the only child out of your neighborhood though, almost all the children from the neighborhood followed. We all got into trouble because of this. I always followed Sanny Klos and his group at least three neighborhoods away, beyond the places my parents did not allow me to go. But my parents did not always go tough-love on my little behind. They understood the temptation. Besides, I’m sure they, too, were tempted when they were kids.

Besides Sanny Klos, Oldman Beggar (another form of Sanny Klos) also comes along. We loved Oldman Beggar as much as we loved Sanny Klos. Oldman Beggar has a protruding belly, dresses in ragged clothes and wears a more comical false face. Oldman Beggar does not give you the same performances as Sanny Klos. He, or she, does as the name pertains; begs. He has a much smaller entourage, perhaps two to three persons, including Oldman Beggar himself. The drummer, who might also be the spokesperson, tells a tale of Oldman Beggar’s misfortune trip.

“While carrying a canoe full of toys it capsized,” he tells the audience, “Oldman Beggar lost the children’s Christmas gifts along with his personal belongings. Distressed over this, Oldman Beggar has to beg for money to replace the things he’s lost.”

Spectators have heard that story many times before, yet, they respond to it as if it was being told for the first time. Everyone is also familiar with the only song Oldman Beggar sings and would join the musicians as they sang.

Oldman Beggar wobbled his potbelly playfully, and at times falls on the ground, which made everyone laugh. Spectators paid nickels, dimes, and quarters as they did Sanny Klos.

There were other groups that toured the neighborhoods to perform their acts. These are seasonal employment opportunities for a lot of folks. We watched in wonderment at the tumbling dances of the Snake Baby (acrobatic dancers, mainly girls ages 5 to 15).  Wearing grass skirts only, their bodies were artfully painted with white chalk. These skilled acrobats performed difficult and intricate tricks, requiring great skill and agility. They tumbled and jumped, then flawlessly land on one leg on the arm or shoulder of their master. At times they balanced their midsection on a pointed knife that he held under their suspended body. Miraculously, there would be no sight of blood. I don’t believe they would be stabbed, it was an awesome illusion. The Snake Baby dancers also got paid for their performances, like Sanny Klos and Oldman Beggar were.

Watching these performances was like being entertained at a Broadway theater but in your own back yard.

Another group of entertainers was the different Devils. These Devils are not to be confused with the western concept of the devil; Satan or demons. These are African masked dancers who perform for entertainment or ritual intentions. These devils take on characteristics relating to the specific tribe. The Gio Devil, we call, Tall Devil stands about 16 feet tall and walks on stilts completely covered with raffia materials. He is enormously agile, rising from a very low ground position to a rooftop level with equal ease. The Gbatu, which has an average height of five-foot, changes his height to three-foot or eight-foot easily. I remember the Vai Devil’s costume is covered with many tiny mirrors. We were frightened by these different characters, but at the same time, entertained.

With all these distractions during the Christmas season, thank God the schools were closed. We would have followed these performers rather than study. If you were promoted to the next grade with good marks, you were guaranteed an enjoyable vacation. On the other hand, if you had to repeat a class or attend summer school, it would be a miserable one. Your parents’ friends who visited your home would always hand over a five-dollar bill for making good grades. That would be ‘your Christmas’. That was a lot of money for a kid. You could take the bus to Broad Street for fifteen cents and watch two movies for a dollar and fifty cents. Perhaps buy some peppermint candies or popcorn and a cold bottle of orange Fanta.

Christmas changed the complexion of the whole country and everyone came into the grip of festivities and celebration. Everybody would be dressed in a new outfit and, by all means, eat a hefty meal. That’s how we celebrated Christmas!